What are the Best Indication Methods for Catching Pike?

By Lee RomangJanuary 21, 2020No Comments

Pike can be a challenging species to bite detect, since they can be extremely sensitive to resistance.  Anglers also tend to experience problems with detection through the coldest parts of the winter when freezing conditions can be a problem. So what are the best indication methods for catching Pike?

We’ve been piking for 30-odd years now, and believe we’ve found the best bite indication method possible for pike.  A far more efficient technique, different from traditional methods. So, we thought it would be useful to compare the traditional method against the ‘Delkim way’,  and let you decide.

Either electronic versions which sound an alarm when the arm tilts past a certain point, or in conjunction with a front bite alarm.  Whilst this setup can work well in the right circumstances, it is prone to several issues:

Roller alarms are not efficient when used for pike  for several reasons:

The line coming from an open spool is often not under enough tension to allow the wheel to move at all – the line simply skips over it. Rollers can be prone to freezing up in harsh conditions. A roller can only detect physical movement and cannot pick up vibrations. Some anglers use a bobbin coupled with a reel set in ‘free spool’ mode.  This gives too much resistance to a taking fish, even on the lightest setting.  Pike can pick up a bait, move the bobbin to the top of its travel, then drop the bait as soon as the resistance of the free spool is felt. 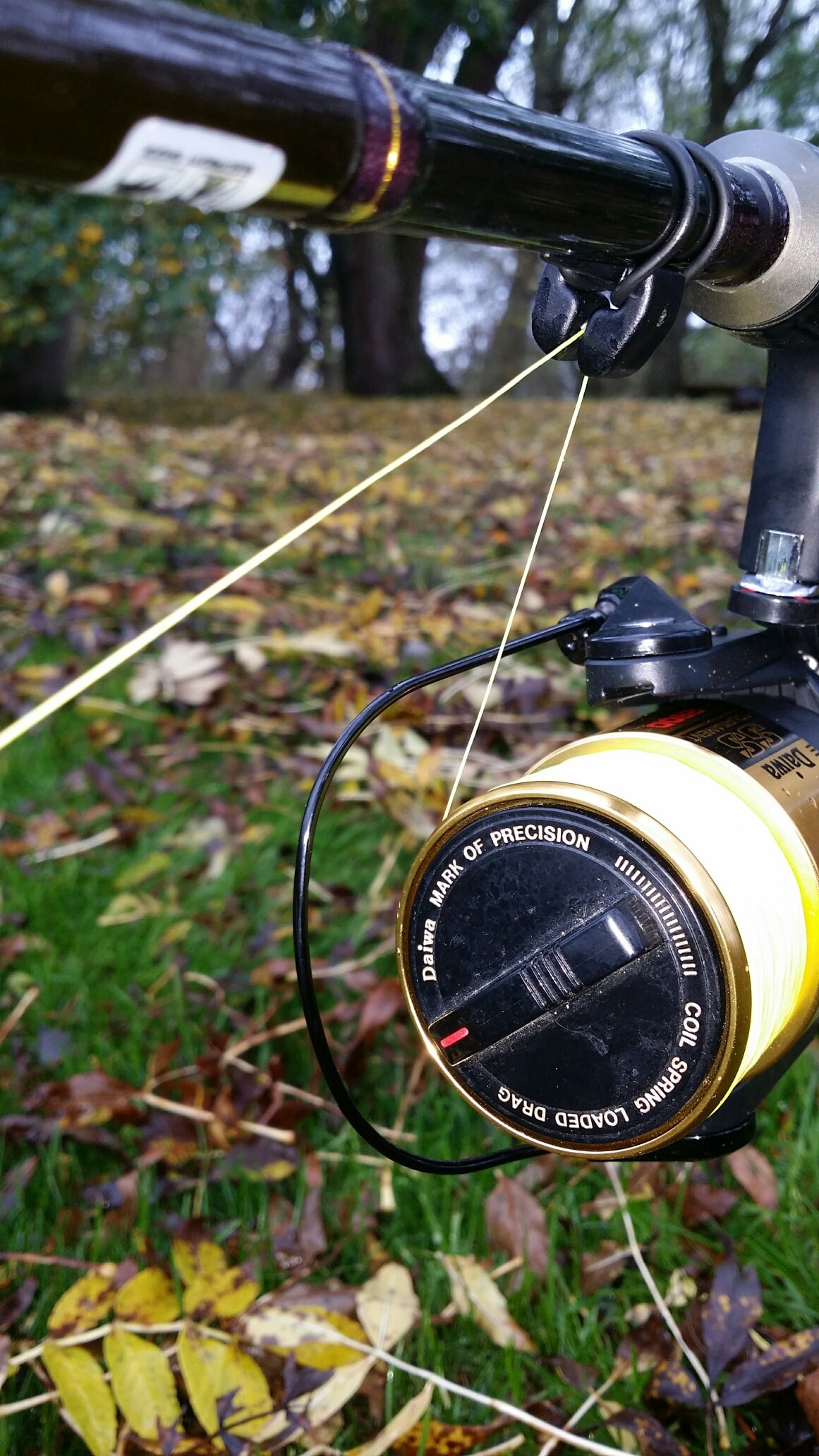 The Delkim system addresses all of these issues…

Firstly, the Delkim alarm, due to its unique vibration sensing system,  can pick up rod knocks which do not move the line backwards or forwards.  Also, the Delkim sensing method uses no moving parts, which means that the alarm is impervious to the harshest freeze-ups!

We would recommend dispensing with drop arms altogether and using a Nitelite Pro bobbin, combined with a Smart Clip line clip fixed immediately above the open spool.

The Nitelite Pro bobbin has good long drop which allows signalling of bites in either direction.  It also has built-in illumination so it can be seen at night.  The Smart Clip is positioned above the spool of the reel, and the line runs up from the open spool, and through the ball clip.  This can be seen in the pictures below.  Note that we’ve used a bright yellow braid to help visualise the set-up.

You can see that the spool is positioned as far forwards as possible. This allows the line to run as vertically as it can off the spool to the clip.  This Smart Clip is also set slightly off-centre so that the slot is lined up with the angle of the line as it runs from the side of the spool.  This ensures a smooth and easy release from the clip when a take occurs.

The combination of the Nitelite Pro bobbin and piezo sensing system of the Delkim alarm gives you an immediate signal as soon as there is a run either forwards or backwards.  If the rod hasn’t been picked up by the time the bobbin hits the top, it releases from the Smart Clip with minimum resistance,  giving the fish chance take line completely freely.

In  really windy conditions, it’s a simple matter of adding a Duocarb to the bobbin to stabilise it.  This adds almost no resistance whilst virtually eliminating false bleeps.

Since the Delkim alarm arrived on the scene in 1992, and with the Nitelite Pro and Smart Clip added to the mix,  we truly believe this is the safest and most sensitive bite indication method available for Pike fishing.  Give it a try, you’ll be amazed at what you see compared to a drop arm!